Getting up to date

I'm such a bad blogger.  I'm trying to Blog or Vlog or both at least once per week in 2016 and so far I haven't managed it.  I will keep trying though.

I ended up creating a separate Blog for my Vlogs to go on as not all of them will be craft related.  It is called The Serial Camera Dodger if you want to check it out. 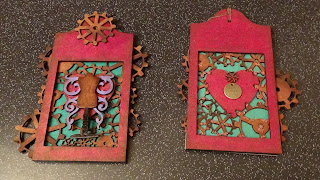 So far this year I have managed to make 3 tags.  One paper and  two MDF and I have started on a new project called He-Bot and She-Bot.  I'm doing a series of videos on the building of the two of them, so I will be creating a new tab on here so that you can find them easily.  I will turn them into a play list when they are completed, so that any one who wants to try later on can find all of the videos easily. 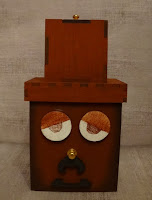 What else do I have going on craft wise?   Tina and I have planned out a number of videos showing you all a bunch of different things that you can do with pieces from Fernli Designs in the form of tutorials.  Some will be experimental like our first video, so keep an eye out for the Ti-Ny Crazy Crafters :D

I'm itching to make mini albums.  I have at least 3 in my head along with some beginners videos that I want to launch. So many ideas right now and so little time.

So that is what I have managed so far this year.  Hopefully I can keep up the pace and have plenty to show you.

Time to get back to it all

Naomi (Sugar Brown)
Hi, I'm a mum of three who started papercrafting in 2005. I started with scrapbooking and soon moved onto cards. I now enjoy making mini albums and constructing 3D projects.

From me to you

Where to find me online

Places that I buy from